Trevor Thompson of Mt Bruce has had a long and varied ongoing conservation experience, the normal kiwi childhood spent trapping possums for pocket money out the back of Eastbourne, Wellington, learning what to eat in the bush, what fixes you up and how to make a shelter.

An early leaving of school at 15 saw him joined the NZ Army Corp of engineers and later becoming the army’s youngest instructor. He learnt how to be organised and organise tasks and people, gaining skills that became very useful in later life such as working in remote communities in the Pacific, building dams, nursing clinics, underwater work on atolls and around New Zealand leading teams in challenging environments. He was often picked to work in remote locations because he had a good understanding of working in those environments.

Always noticing the great diversity of life, often not too different in many cases to home, the knowledge he had and the extra stuff drilled into him by experts on survival and being at home in a natural environment, allowed him a big edge later in life.

On leaving the military after seven and a half years, Trevor became a deep sea diver in South East Asia for three years and then three years off Taranaki. He never forgot some of the sea life at 300+ foot, some maybe not known to science.

After diving there was a period of crayfishing, paua diving, sawmilling, teaching conservation to kids at the local school and guiding at the national wildlife centre Mt Bruce.

Then came an opportunity to take a conservation corp with 11 young people to organise and motivate. A big range of conservation tasks were done to a high standard with many of the students gaining a lifelong interest in the bush from their time with Trevor. After five years of this he went back into the forest (pine this time) logging.

In April 2001 the Department of Conservation needed someone to set up the most ambitious predator control system in the lower North Island in the 1000 ha forest behind the national wildlife centre at Mt Bruce. His task was to survey and cut around 120 km of predator control tracks with a great bunch of Rangitaane iwi guys and many others.

Trevor set up and ran predator control to allow the reintroduction of kokako and later kiwi. Controlling rats, possums and mustelids over 1000 ha of difficult country along with monitoring, bird work and a host of other stuff, was a tall order, but his military background gave him a big edge in being organised and getting a team of guys to perform well under difficult conditions. Throughout this time predators were kept well controlled and no kokako or kiwis were killed by predators.

After four years with Doc it became increasingly frustrating to see things done in ways that were often inefficient and needlessly costly, so he left the department and went out on his own and has never looked back.

Since starting Forest Protectors he has worked with far more endangered species, got pest animals to record lows, put in walking tracks and bridges in private forest parks and is running a recovery program for probably the North Island’s rarest plant, to name a few things.

He is also helping landowners to control weeds, plant natives and eliminate predators. He is always willing to assist or just give good advice to anyone who wants to look after this land’s special places, plants and animals. 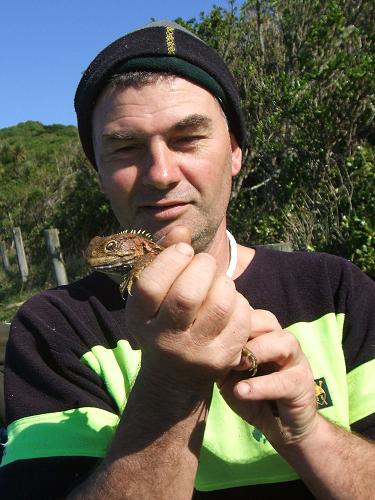